HISTORY – Wine was a common drink in ancient times and was highly valued by the Romans. But how did they produce it back then? Researchers from the Universities of Avignon and Rome have investigated this.

To do this, they examined three Roman-era amphorae, wine jars, found in 2018 on the seabed of what is now the port of San Felice Circeo, Italy. The results of their research were published this Wednesday, June 29, in the journal PLOS ONE.

After examining the amphorae discovered in Italy, various chemical compounds were found, ranging from the remains of plant tissue to various pollen. This made it possible to detect derivatives of grape and pine in the jars, suggesting that they were used in winemaking.

In particular, researchers believe they were used in the production of two types of wine, red and white. The pine allowed him to produce tar, which was used to impregnate the glasses but also to flavor the drink. This is all the more plausible as other excavation sites have observed something similar. 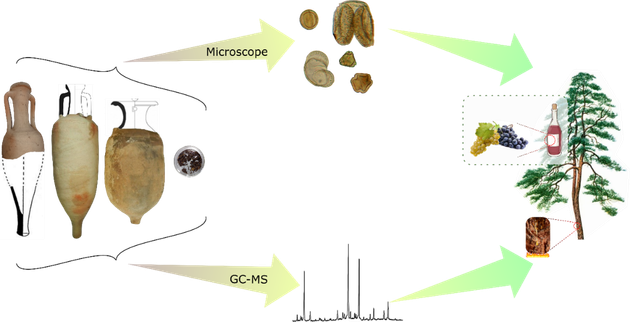 Diagram showing the various parties involved in the manufacture of Roman wine.

In order to produce wine, it had to be imported. In fact, not all ingredients were available locally. If the vine pollen corresponds to wild species of the region, then according to other historical sources the pine tar was probably imported from Calabria or Sicily.

While chemical analysis has identified various components, caution should be exercised in interpretation. For example, tartaric acid was found, which is considered proof of the presence of wine. However, this chemical compound can also come from the surrounding soil or can be found in certain common plastic bags.

This is therefore the interest of the multidisciplinary approach to study ancient cultural practices through archaeological artifacts. In this case, to ensure that the amphorae actually contained wine, the researchers combined chemical analysis and paleobotany.

This is what the study’s authors claim: “By using different approaches (…) we have pushed the conclusion further in understanding the ancient practices than would have been the case with a single approach.”

Also see on HuffPost: Deepest Shipwreck Ever Found in the Philippines